This post contains affiliate links which means if you click and buy I may make a commission at no cost to you. See my policy for more information.

Horray! You’re baby is starting to eat solids! It’s an exciting time and one (hopefully) both you and your baby love. My little guy loved eating table food – still does. And to our benefit, he has a pretty broad palate (at least for now – hopefully that keeps up)! But as much fun as it has been to introduce him to new foods, it’s been kind of a pain finding utensils that worked best. We’ve had cups that leaked or had spouts that left him sputtering and soaked with overflowing water, and bibs that were supposed to catch extra food falling that caught nothing but crumbs. In light of that rather tedious search, here’s a list of our favorite utensils for toddlers that we use in our own home.

I love these cups. And my little guy loves these cups. They don’t have sippy spout like many other cups, so Little Man will often put his to his lips when he sees us drinking from our own cups. Which is great, because once we got these cups he was no longer trying to drink out of my personal cups (you know – without a lid). It saved a lot of messes and gave Little Man some appreciated independence. It doesn’t spill easily (though being chucked from a highchair will result in some splatter) and the water also doesn’t come flooding out, making them an excellent option when stockpiling utensils for your toddler(s)!

These cups are BY FAR my favorite cups for my son’s milk. Yes, I give him a different cup for milk than I do for water. These are great when transitioning from a bottle to a sippy cup because they still have a spout, reminiscent of a bottle. Plus, the flow was a lot more controlled than several of the other cups we tried. A lot less spilling than some of the other cups out there, and virtually no gagging on an overflow of milk make these fantastic, in my opinion. Plus, they’re rather sturdy, so they handle millions of drops from the highchair like nothing happened. 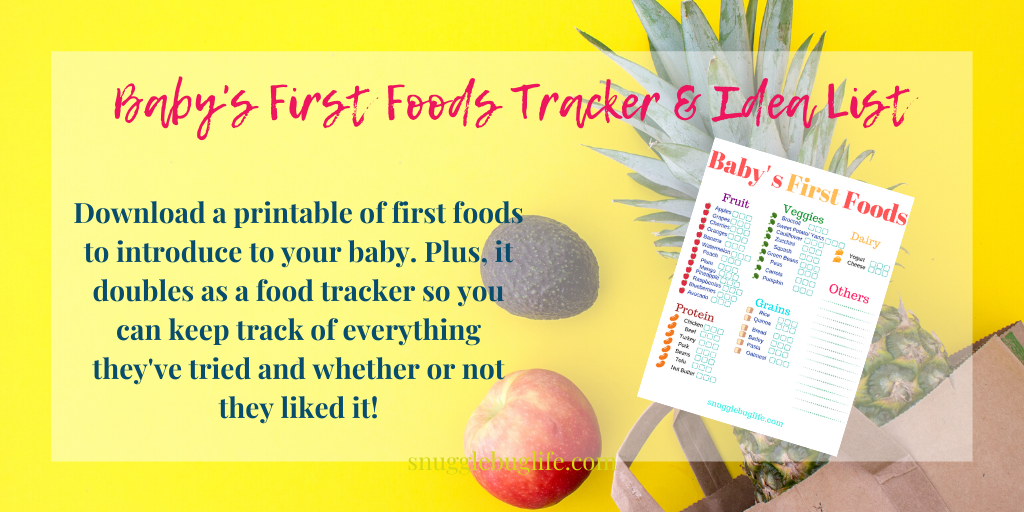 Give me access to all your printable freebies, including the Baby’s First Foods tracker!

We’ve tried a couple of plates and this one has been great. It’s a little bit heavier than other plates that we’ve tried, so its not as easy to be flipped off of a table or highchair (which happens plenty). Granted, the suction on it is not fantastic – it works, but occasionally my 14-month-old can get it off the highchair. Then it’s anything goes. But like I said, the suction feature does work, it’s just not 100% effective.

It also doesn’t take up a ton of space – not in your cabinet nor on the highchair or table. We tried other plates that took up much more space (you know the ones – the ones that look like they’re attached to mats) which were effective for mealtime; but the food still made it off of the mat portion. So for us, the larger plates with the attached mats just seemed to take up more space then necessary and didn’t really eliminate much of the cleanup.

My son has just begun trying to use utensils on his own, but these have been great. They had soft enough edges that I’m not worried about him hurting himself when he gets overzealous in the process of bringing the fork to his face; but they’re also well designed enough that they do actually pick up and hold food rather well. As far as cutlery, these are the only utensils for toddlers that we’ve ever owned because they work so effectively.

I like these bowls because they’re inexpensive, but efficient. The suction, much like the plate mentioned above, is imperfect, but it works pretty well. Occasionally my son will manage to get the bowl unstuck from his highchair or the table, but I have yet to see any that don’t occasionally have the ability to be unstuck. I also love that these come in a variety of sizes, making them easy to store and to travel.

So, this may not technically fit into the “utensils for toddlers” category, but I think it does. So I’m going to include it.

The silicone pocket on the front of this bib is really what makes this bib great. I also like the fact that the top portion of the bib is soft and comfortable, so there is no digging into his skin. We have some bibs that have plastic pockets, but they lay flat against the bib and the food just dropped right past the pocket and into our son’s lap instead. So if you’re looking for a bib I highly recommend getting one with a silicone pocket in the front. It’s still soft, but it sticks out enough to actually catch the food your kid is dropping.

Give me access to all your printable freebies, including the Baby’s First Foods tracker!

And in those early days of starting solids, you can expect a lot of food to drop. For us, it made the most sense to scoops the food out of the pocket mid-meal. Then we put it back on our son’s plate to continue to work his way through.

There are two downfalls of having the fabric top portion of the bib. One that I found was, at least in the beginning some of the colors may bleed. Specifically (in my experience) the blue bled onto my son’s neck and clothing the first handful of uses. Incredibly annoying. The other downfall is that they use Velcro to clasp, which can sometimes come undone. If these two annoyances are deal breakers, then you may want to consider another bib. Such as the PandaEar Set of 2 Cute Silicone Baby Bibs instead (which I have not tried).

You may also want to check out:

We use cookies to ensure that we give you the best experience on our website. If you continue to use this site we will assume that you are happy with it.Ok