As our son has been getting older and more independent (14 months and he thinks he’s grown :-P) my husband and I have been discussing the way being in daycare seems to be impacting him. In some ways, its been absolutely great, but there have been some frustrations as well. No matter how much you love and trust your provider, there are pros and cons of daycare, just like any other childcare option. And just like any other childcare option you’re evaluating, you’ll have to weigh your own list of pros and cons in deciding if daycare versus another solution will work best for you and your family.

Let’s be honest. If your kid can’t do anything other than lay down, he or she may be highly motivated to get moving in order to keep up with other kids. I know with my son, he had rolled a handful of times before we placed him in daycare, but those times were usually born out of frustration from being placed in his stomach. Once he was in the presence of other children, he began rolling over constantly. He wanted in on the action!

At our daycare there is one little boy that seems to have become Little Man’s best friend. It’s freakin’ adorable. They’re about 2 months apart and when they see each other in the morning they start bouncing up and down, smiling, and either waving or reaching for each other.

I honestly adore our daycare provider. It’s so, so, so, so, so (should I go on?) hard to leave your kid with someone you don’t know. It’s so hard to trust that someone is going to take care of them the way you want and entrust your most precious person to them. But it can be so rewarding too. When my son goes to daycare, he’s in the care of someone who loves him and demonstrates that he can trust more than just Mom and Dad. If he has needs that have to be met, he can trust that his provider is going to take care of those needs. She’s not going to leave him hanging. And as our kids expand their circle of trusted adults, it makes them more confident. 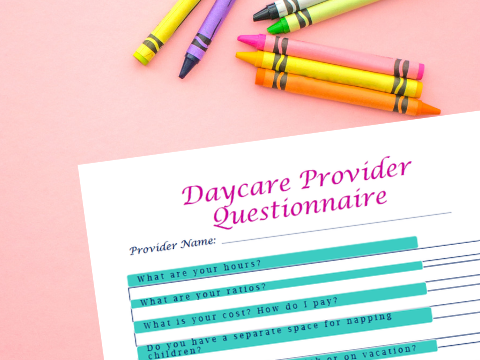 I Could Use a Printable Daycare Provider Questionnaire!

Check your email, or click here to print the questionnaire right away!

She’s Not Mommy But She Loves Me

My son has someone who genuinely loves him, and demonstrates it to him all day long. He is excited to give her hugs when he arrives at daycare and he happily blows her kisses as we leave in the evening.

I’m white, my husband is white, and my son is white. At home, except when we’re out in public or hanging out with friends, he lives his life in a place where he is surrounded by people that look like him. But at daycare he is in the racial minority. He’s exposed to children and providers who speak different languages, eat different foods, and look different from him. How wonderful is that?

He Lights Up When We Pick Him Up

Want some confirmation that your kid thinks you’re the bomb diggity? Pick him or her up from daycare. I swear, almost nothing feels better than when he sees me and drops what he’s doing to great me with a giant smile and arms thrust up in the pick-me-up position.

Let’s face it — kids are known for bringing every germ and illness they come into contact with home with them. If your kid is in daycare, you can (and should) definitely expect they’ll catch whatever the other kids bring into daycare with them. Not only that, but you can expect to catch some of those illnesses yourself.

One of my biggest frustrations on my personal pros and cons list for daycare is that my son has picked up some bad habits. Namely, in his case, he’s started screaming at the top of his lungs when he doesn’t get his way. Sure, you could say that its just because he’s a toddler, but unfortunately, his overall demeanor when he does this appears to replicate one of the kid’s attitudes I’ve seen first-hand at daycare.

Before returning from maternity leave, this was one of my biggest fears. Would he take his first steps with someone other than me? What if he gets hurt? Is his provider going to be able to provide him with the same level of assurance and comfort? Would he say his first words for someone else? I’ll be honest, I definitely cried when I found out he waved for the first time at daycare. But I was also grateful to know that he was re-affirmed when he did it. Mostly because she promptly sent a video of him doing it again. Still sucked to have missed it in person, though.

I Could Use a Printable Daycare Provider Questionnaire!

Check your email, or click here to print the questionnaire right away!

You’re Not With Your Kid

Lets face it, there’s no pro to this con regarding daycare. If you want to be with your kid, not being with him or her is tough. Something you’ll work through, but I’m still not ok with it and I’ve been back to work for nearly a year. Nothing beats being with your child.

I don’t know about you – but bottles did not go over well in our house. He demanded to be fed straight from the source. None of this plastic middleman nonsense. We desperately wanted him to take a bottle. We had tried holding the bottle in front of his face, willing him to drink. We…

I’ll admit – I’m not the tidiest mom. In fact, I’m not even close. But my 2 year old loves cleaning up. And making messes. But that’s beside the point. Teaching our toddler to clean up is something my husband and I really tried to instill in him. Because all parents want their kids to…

If you’re anything like me, establishing a bedtime routine for your kid might seem like a daunting task. I can’t even manage my own consistent bedtime routine! How am I supposed to put a routine in place and make this strong-willed minion consistently go through the same routine night after night? As it turns out,…

Easter is right around the corner. This means springtime, pastels, and Easter baskets! I know that this past year has been pretty difficult on a lot of people. Including our kids. For me, that really incentivizes me to make sure my toddler’s Easter basket is extra special this year.  But what can you do for…

Almost anytime you bring home a new baby there are lots of feelings coursing through your home: stress, anxiety, exhaustion, bliss, love, joy, confusion, pain. It’s a super exciting time. But if we focus on the excitement, then we may neglect to make sure we’re paying attention to all of those other emotions that are…

Little Man started learning to walk he would go between me and Hubbaloo This started right around when he was 13 months old. The first day, literally, that he started – he face planted hard into the base of the couch. Poor kiddo promptly got an enormous, unicorn horn-style bump in the middle of his…